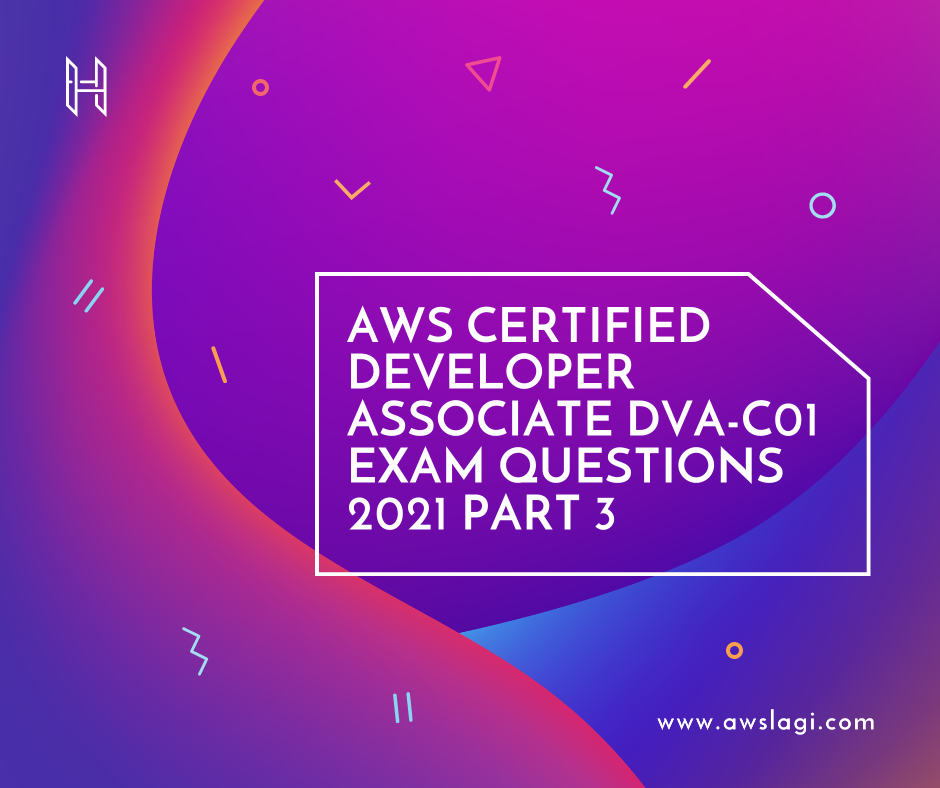 Notes: Hi all, AWS Certified Developer Associate(DVA-C01) Practice Exam Part 3 will familiarize you with types of questions you may encounter on the certification exam and help you determine your readiness or if you need more preparation and/or experience. Successful completion of the practice exam does not guarantee you will pass the certification exam as the actual exam is longer and covers a wider range of topics. We highly recommend you should take AWS Certified Developer Associate DVA-C01 Actual Exam Version because it include real questions and highlighted answers are collected in our exam. It will help you pass exam in easier way.

120. An on-premises application is implemented using a Linux, Apache, MySQL and PHP (LAMP) stack. The Developer wants to run this application in AWS. Which of the following sets of AWS services can be used to run this stack?

122. A Developer must trigger an AWS Lambda function based on the item lifecycle activity in an Amazon DynamoDB table. How can the Developer create the solution?

123. An on-premises legacy application is caching data files locally and writing shared images to local disks. What is necessary to allow for horizontal scaling when migrating the application to AWS?

124. After installing the AWS CLI, a Developer tries to run the command aws configure but receives the following error: Error: aws: command not found What is the most likely cause of this error?

125. A Developer will be using the AWS CLI on a local development server to manage AWS services. What can be done to ensure that the CLI uses the Developer’s IAM permissions when making commands?

126. A Developer needs to use AWS X-Ray to monitor an application that is deployed on EC2 instances. What steps have to be executed to perform the monitoring?

127. An application is real-time processing millions of events that are received through an API. What service could be used to allow multiple consumers to process the data concurrently and MOST cost-effectively?

128. A Developer is creating a mobile application with a limited budget. The solution requires a scalable service that will enable customers to sign up and authenticate into the mobile application while using the organization’s current SAML 2.0 identity provider. Which AWS service should be used to meet these requirements?

131. When a Developer tries to run an AWS CodeBuild project, it raises an error because the length of all environment variables exceeds the limit for the combined maximum of characters. What is the recommended solution?

132. A company needs to encrypt data at rest, but it wants to leverage an AWS managed service using its own master key Which of the following AWS service can be used to meet these requirements?

133. A company is developing a new online game that will run on top of Amazon ECS. Four distinct Amazon ECS services will be part of the architecture, each requiring specific permissions to various AWS services. The company wants to optimize the use of the underlying Amazon EC2 instances by bin packing the containers based on memory reservation. Which configuration would allow the Development team to meet these requirements MOST securely?

134. An application running on EC2 instances is storing data in an S3 bucket. Security policy mandates that all data must be encrypted in transit. How can the Developer ensure that all traffic to the S3 bucket is encrypted?

135. A Developer uses AWS CodeDeploy to automate application deployment that connects to an external MySQL database. The Developer wants to securely access the encrypted secrets, such as API keys and database passwords. Which of the following solutions would involve the LEAST administrative effort?

137. A Developer must repeatedly and consistently deploy a serverless RESTful API on AWS. Which techniques will work? (Choose two.)

139. A customer wants to deploy its source code on an AWS Elastic Beanstalk environment. The customer needs to perform deployment with minimal outage and should only use existing instances to retain application access log. What deployment policy would satisfy these requirements?

A. Rolling
B. All at once
C. Rolling with an additional batch
D. Immutable

140. A Developer must re-implement the business logic for an order fulfilment system. The business logic has to make requests to multiple vendors to decide where to purchase an item. The whole process can take up to a week to complete. What is the MOST efficient and SIMPLEST way to implement a system that meets these requirements?

141. An existing serverless application processes uploaded image files. The process currently uses a single Lambda function that takes an image file, performs the processing, and stores the file in Amazon S3. Users of the application now require thumbnail generation of the images. Users want to avoid any impact to the time it takes to perform the image uploads. How can thumbnail generation be added to the application, meeting user requirements while minimizing changes to existing code?

142. Where should the appspec.yml file be placed in order for AWS CodeDeploy to work?

A. In the root of the application source code directory structure
B. In the bin folder along with all the compiled code
C. In an S3 bucket
D. In the same folder as the application configuration files

143. The release process workflow of an application requires a manual approval before the code is deployed into the production environment. What is the BEST way to achieve this using AWS CodePipeline?

A. Use multiple pipelines to allow approval
B. Use an approval action in a stage
C. Disable the stage transition to allow manual approval
D. Disable a stage just prior the deployment stage

144. An application overwrites an object in Amazon S3, and then immediately reads the same object. Why would the application sometimes retrieve the old version of the object?

145. An organization must store thousands of sensitive audio and video files in an Amazon S3 bucket. Organizational security policies require that all data written to this bucket be encrypted. How can compliance with this policy be ensured?

146. A company has written a Java AWS Lambda function to be triggered whenever a user uploads an image to an Amazon S3 bucket. The function converts the original image to several different formats and then copies the resulting images to another Amazon S3 bucket. The Developers find that no images are being copied to the second Amazon S3 bucket. They have tested the code on an Amazon EC2 instance with 1GB of RAM, and it takes an average of 500 seconds to complete. What is the MOST likely cause of the problem?

A. The Lambda function has insufficient memory and needs to be increased to 1 GB to match the Amazon EC2 instance
B. Files need to be copied to the same Amazon S3 bucket for processing, so the second bucket needs to be deleted.
C. Lambda functions have a maximum execution limit of 300 seconds, therefore the function is not complete.
D. There is a problem with the Java runtime for Lambda, and the function needs to be converted to node.js

147. A company is using Amazon API Gateway to manage access to a set of microservices implemented as AWS Lambda functions. Following a bug report, the company makes a minor breaking change to one of the APIs. In order to avoid impacting existing clients when the new API is deployed, the company wants to allow clients six months to migrate from v1 to v2. Which approach should the Developer use to handle this change?

149. A web application is using Amazon Kinesis Streams for clickstream data that may not be consumed for up to 12 hours. How can the Developer implement encryption at rest for data within the Kinesis Streams?

A. Enable SSL connections to Kinesis
B. Use Amazon Kinesis Consumer Library
C. Encrypt the data once it is at rest with a Lambda function
D. Enable server-side encryption in Kinesis Streams

150. A company is using AWS CodeBuild to compile a website from source code stored in AWS CodeCommit. A recent change to the source code has resulted in the CodeBuild project being unable to successfully compile the website. How should the Developer identify the cause of the failures?

A. Modify the buildspec.yml file to include steps to send the output of build commands to Amazon CloudWatch.
B. Use a custom Docker image that includes the AWS X-Ray agent in the AWS CodeBuild project configuration.
C. Check the build logs of the failed phase in the last build attempt in the AWS CodeBuild project build history.
D. Manually re-run the build process on a local machine so that the output can be visualized.