The Actual Exam Version included actual exam questions verified by IT Experts. We verified questions and updated frequently each month and also based on members’ feedback to keep updating with the real exam. We are offering money back immediately if questions in our Actual Exam Version do not appear in your exam. Highly recommend you take the Actual Exam Version then go to the exam as soon as possible. We’re using Google Docs to manage our actual exam contents. This way to keep all members always in the latest update and this is the fastest way to learn. When you make the payment, we will add your gmail to access our materials.

QUESTION NO: 1
Which of the following is NOT a valid objective of testing?

A. Preventing defects from being introduced into the code
B. Investigating and fixing defects in the software under test
C. Gaining confidence that the system is fit-for-purpose
D. Providing information for stakeholders’ decision making

QUESTION NO: 2
During which stage of the fundamental test process is the testability of requirements evaluated?

QUESTION NO: 3
A new testing tool has been selected for an organization and a pilot project has successfully completed. The next step is to deploy the tool within the organization.
What is a key success factor in tool deployment?

A. Estimate a cost-benefit ratio based on a firm business case.
B. Determine whether benefits will be achieved at reasonable cost.
C. Provide support for the test team using the tool.
D. Assessment of organizational maturity, strengths and weaknesses.

QUESTION NO: 4
Which of the following represents good testing practice for testers, irrespective of the software lifecycle model used?

QUESTION NO: 5
system is being enhanced to simplify screen navigation for users.
Which of the following does NOT reflect structural testing?

QUESTION NO: 6
Which of the following is a defect that is more likely to be found by a static analysis tool than by other testing techniques?

A. Omission of a major requirement
B. Inadequate decision coverage
C. Component memory leakage
D. Variables that are not used improperly declared

QUESTION NO: 7
You are examining a document which gives the precise steps needed in order to execute a test.
What is the correct definition of this document?

QUESTION NO: 8
Which of the following type of defect would NOT be typically found by using a static analysis tool?

QUESTION NO: 9
Which of the following would NOT be a common metric used for monitoring test preparation and execution?

QUESTION NO: 10
Which of the following would you NOT expect to see on an incident report from test execution?

A. The version(s) of the software under test
B. The test execution schedule
C. Expected results and actual results
D. Precise steps to reproduce the problem

QUESTION NO: 11
Which of the following would be a good test technique to use when under severe time pressure?

QUESTION NO: 12
Which of the following options BEST explain the pesticide paradox principle of testing?

A. If we do not regularly review and revise our tests, we’ll stop finding defects.
B. Repeatedly running a set of tests will ensure that a system is defect free.
C. Defects are, paradoxically, often contained in a small number of modules.
D. Testing, like spraying pesticide, is an effective bug / defect removal activity.

QUESTION NO: 13
During the development of a software change for a system, the developer makes a mistake in his work, which leads to a fault in the code. Unfortunately the fault is not found by software testing and is released into live.
What is the definite consequence of this mistake?

A. The system will fail, causing a defect.
B. If the defect is executed, the system may fail.
C. Loss of money, time, or business reputation.
D. Contractual requirements have not been met by testing.

QUESTION NO: 14
Which of the following is NOT a valid use of decision coverage?

QUESTION NO: 15
You have been asked to improve the way test automation tools are being used in your company.
Which one of the following is the BEST approach?

A. Selecting and automating scripts that test new functionality to find the most defects
B. Using a keyword-driven testing approach to separate the actions and data from the tool’s script
C. Ensuring that all data, inputs and actions are stored in the tool’s script for ease of maintenance
D. Keeping expected results separate from the automation tool to allow the testers to check the results

QUESTION NO: 16
Which option BEST describes how the level of risk is determined?

QUESTION NO: 17
Your task is to compile a test execution schedule for the current release of software.
The system specification states the following logical dependencies:
An admin user must create/amend/delete a standard user.
A standard user is necessary to perform all other actions.
The test plan requires that re-tests must be performed first, followed by the highest priority tests. To save time, the test plan states that tests should be scheduled to create test data for the subsequent tests in the schedule.
The following test cases have been designed, with an indication of priority (1 being the highest priority) and whether the test has previously failed.

QUESTION NO: 18
Your company is developing a system with complex business rules and many branches in the structure of its code components. You need to choose one black box technique and one white box technique for test case design.
Which one of the following offers the BEST choice?

QUESTION NO: 19
Which one of the following statements about testing techniques is TRUE?

Frequency – The number of times the system should be automatically switched on per day;minimum once per day, maximum 5 times
Duration – The duration of operation, in whole minutes, each time it is switched on, ranging from 1 to 60
Applying 2-value boundary value analysis, which of the following options has the correct test set of valid and invalid boundary values? 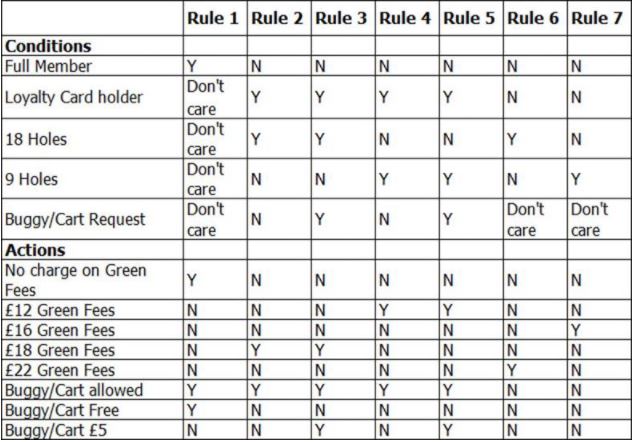 QUESTION NO: 22
Which of the following activities is appropriate to the test planning stage?

A. Analyzing the test basis
B. Assigning resources for the planned activities
C. Designing the test environments
D. Writing a test execution schedule

QUESTION NO: 23
Testing effort can depend on a number of factors, which one of the following is MOST likely to impact the amount of effort required?

A. The predicted number of defects and the amount of network required
B. The ratio of developers to testers in the project team
C. The planned use of a project management tool to schedule tasks
D. The responsibilities for testers and developers being clearly defined

QUESTION NO: 24
booking system for a city bus service prices its fares according to the time of travel:
Peak-time tariff starts at 0600 and finishes at 1000 am
Off-peak tariff applies during all other times of service
The bus service does not operate between 2300 and the start of the next day’s peak service
Note that all times mentioned are inclusive.
When applying the equivalence partitioning test design technique, which of the following options shows test case inputs that each fall into a different equivalence partition?

QUESTION NO: 25
Which of the following is a white-box test technique?

In the above State Table, which of the following represents an invalid transition? QUESTION NO: 28
Which of the following options describe the causal chain in the correct sequence?

QUESTION NO: 29
Which of the following would achieve the HIGHEST level of testing independence for a project’s system test level?

QUESTION NO: 30
When can functional and structural testing BOTH be applied?