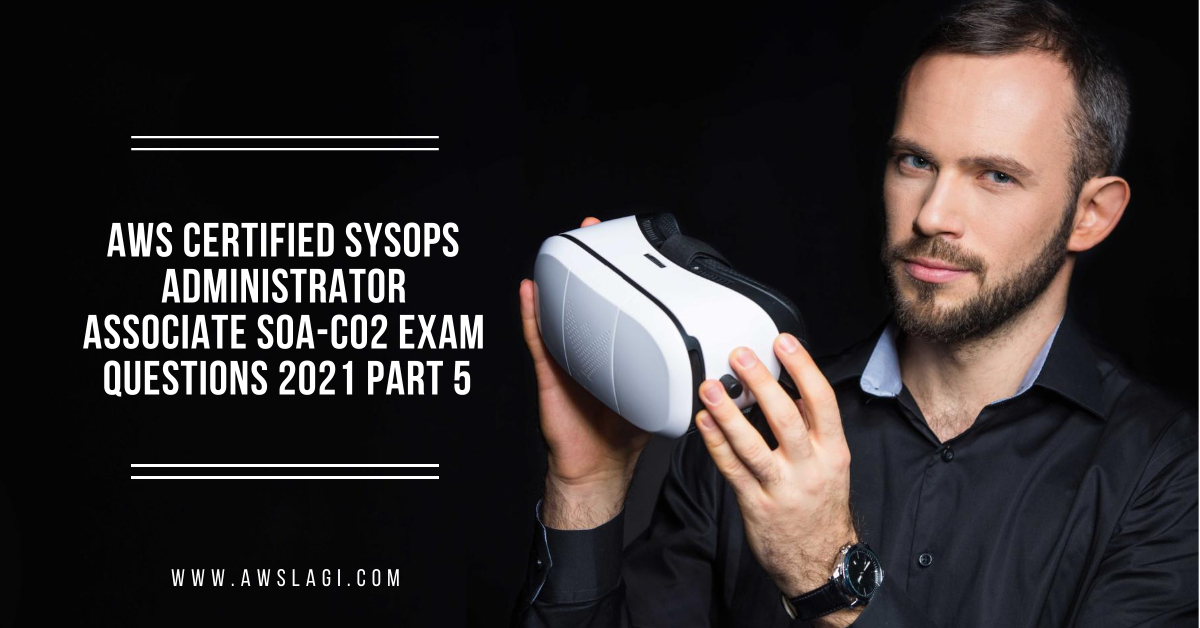 Notes: Hi all, AWS Certified SysOps Administrator Associate Practice Exam Part 5 will familiarize you with types of questions you may encounter on the certification exam and help you determine your readiness or if you need more preparation and/or experience. Successful completion of the practice exam does not guarantee you will pass the certification exam as the actual exam is longer and covers a wider range of topics. We highly recommend you should take AWS Certified SysOps Administrator Associate Actual Exam Version because it include real questions and highlighted answers are collected in our exam. It will help you pass exam in easier way.

161. A SysOps Administrator is responsible for managing a set of 12.micro Amazon EC2 instances. The Administrator wants to automatically reboot any instance that exceeds 80% CPU utilization. Which of these solutions would meet the requirements?

162. A company creates custom AMI images by launching new Amazon EC2 instances from an AWS CloudFormation template. It installs and configures necessary software through AWS OpsWorks, and takes images of each EC2 instance. The process of installing and configuring software can take between 2 to 3 hours, but at times, the process stalls due to installation errors. The SysOps Administrator must modify the CloudFormation template so if the process stalls, the entire stack will fail and roll back. Based on these requirements, what should be added to the template?

163. An HTTP web application is launched on Amazon EC2 instances behind an ELB Application Load Balancer. The EC2 instances run across multiple Availability Zones. A network ACL and a security group for the load balancer and EC2 instances allow inbound traffic on port 80. After launch, the website cannot be reached over the internet. What additional step should be taken?

165. A SysOps Administrator is troubleshooting an AWS CloudFormation template whereby multiple Amazon EC2 instances are being created. The template is working in us-east-1, but it is failing in us-west-2 with the error code: AMI [ami-12345678] does not exist. How should the Administrator ensure that the AWS CloudFormation template is working in every region?

166. A company is storing monthly reports on Amazon S3. The company’s security requirement states that traffic from the client VPC to Amazon S3 cannot traverse the internet. What should the SysOps Administrator do to meet this requirement?

168. An application running on Amazon EC2 instances needs to write files to an Amazon S3 bucket. What is the MOST secure way to grant the application access to the S3 bucket?

169. Company A purchases company B and inherits three new AWS accounts. Company A would like to centralize billing and reserved instance benefits but wants to keep all other resources separate. How can this be accomplished?

A. Implement AWS Organizations and create a service control policy that defines the billing relationship with the new master account.
B. Configure AWS Organizations Consolidated Billing and provide the finance team with IAM access to the billing console.
C. Send Cost and Usage Reports files to a central Amazon S3 bucket and load the data into Amazon Redshift. Use Amazon QuickSight to provide visualizations to the finance team.
D. Link the Reserved Instances to the master payer account and use Amazon Redshift Spectrum to query Detailed Billing Report data across all accounts.

170. A company has multiple web applications running on Amazon EC2 instances in private subnets. The EC2 instances require connectivity to the internet for patching purposes, but cannot be publicly accessible. Which step will meet these requirements?

171. A company has 50 AWS accounts and wants to create an identical Amazon VPC in each account. Any changes the company makes to the VPCs in the future must be implemented on every VPC. What is the SIMPLEST method to deploy and update the VPCs in each account?

172. After a network change, application servers cannot connect to the corresponding Amazon RDS MySQL database. What should the SysOps Administrator analyze?

173. A SysOps Administrator has configured health checks on a load balancer. An Amazon EC2 instance attached to this load balancer fails the health check. What will happen next? (Choose two.)

176. A database is running on an Amazon RDS Multi-AZ DB instance. A recent security audit found the database to be cut of compliance because it was not encrypted. Which approach will resolve the encryption requirement?

A. Log in to the RDS console and select the encryption box to encrypt the database.
B. Create a new encrypted Amazon EBS volume and attach it to the instance.
C. Encrypt the standby replica in the secondary Availability Zone and promote it to the primary instance.
D. Take a snapshot of the RDS instance, copy and encrypt the snapshot, and then restore to the new RDS instance.

178. A SysOps Administrator is writing a utility that publishes resources from an AWS Lambda function in AWS account A to an Amazon S3 bucket in AWS Account B. The Lambda function is able to successfully write new objects to the S3 bucket, but IAM users in Account B are unable to delete objects written to the bucket by Account A. Which step will fix this issue?

179. Which of the following steps are required to configure SAML 2.0 for federated access to AWS? (Choose two.)

Reveal
Answer: A B

180. A SysOps Administrator is attempting to download patches from the internet into an instance in a private subnet. An internet gateway exists for the VPC, and a NAT gateway has been deployed on the public subnet; however, the instance has no internet connectivity. The resources deployed into the private subnet must be inaccessible directly from the public internet. What should be added to the private subnet’s route table in order to address this issue, given the information provided.

181. An organization created an Amazon Elastic File System (Amazon EFS) volume with a file system ID of fs-85ba41fc, and it is actively used by 10 Amazon EC2 hosts. The organization has become concerned that the file system is not encrypted. How can this be resolved?

182. An existing data management application is running on a single Amazon EC2 instance and needs to be moved to a new AWS Region in another AWS account. How can a SysOps Administrator achieve this while maintaining the security of the application?

185. A SysOps Administrator has been tasked with deploying a company’s infrastructure as code. The Administrator wants to write a single template that can be reused for multiple environments in a safe, repeatable manner. What is the recommended way to use AWS CloudFormation to meet this requirement?

186. An application accesses data through a file system interface. The application runs on Amazon EC2 instances in multiple Availability Zones, all of which must share the same data. While the amount of data is currently small, the company anticipates that it will grow to tens of terabytes over the lifetime of the application. What is the MOST scalable storage solution to fulfill the requirement?

187. A SysOps Administrator is running an auto-scaled application behind a Classic Load Balncer. Scaling out is triggered when the CPUUtilization instance metric is more than 75% across the Auto Scaling group. The Administrator noticed aggressive scaling out and after discussing with developers, an application memory leak is suspected causing aggressive garbage collection cycle. How can the Administrator troubleshoot the application without triggering the scaling process?

A. Suspend the scaling process before troubleshooting.
B. Delete the Auto Scaling group and recreate it when troubleshooting is complete.
C. Remove impacted instances from the Classic Load Balancer.
D. Create a scale down trigger when the CPUUtilization instance metric is at 70%.

189. A company monitors its account activity using AWS CloudTrail, and is concerned that some log files are being tampered with after the logs have been delivered to the account’s Amazon S3 bucket. Moving forward, how can the SysOps Administrator confirm that the log files have not been modified after being delivered to the S3 bucket.

A. Stream the CloudTrail logs to Amazon CloudWatch to store logs at a secondary location.
B. Enable log file integrity validation and use digest files to verify the hash value of the log file.
C. Replicate the S3 log bucket across regions, and encrypt log files with S3 managed keys.
D. Enable S3 server access logging to track requests made to the log bucket for security audits.

190. After launching a new Amazon EC2 instance from a Microsoft Windows 2012 Amazon Machine Image (AMI), the SysOps Administrator is unable to connect to the instance using Remote Desktop Protocol (RDP). The instance is also unreachable. As part of troubleshooting, the Administrator deploys a second instance from a different AMI using the same configuration and is able to connect to the instance. What should be the next logical step in troubleshooting the first instance?

A. Launch a script that downloads and installs the application using the Amazon EC2 user data.
B. Create a custom API using Amazon API Gateway to call an installation executable from an AWS CloudFormation Template.
C. Use AWS Systems Manager to inject the application into an AMI.
D. Configure AWS CodePipeline to deploy code changes and updates.

193. What should a SysOps Administrator do to ensure a company has visibility into maintenance events performed by AWS?

196. A SysOps Administrator must ensure all Amazon EBS volumes currently in use, and those created in the future, are encrypted with a specific AWS KMS customer master key (CMK). What is the MOST efficient way for the Administrator to meet this requirement?

197. A company has an application running on a fleet of Microsoft Windows instances. Patches to the operating system need to be applied each month. AWS Systems Manager Patch Manager is used to apply the patches on a schedule. When the fleet is being patched, customers complain about delayed service responses.

A. Change the number of instances patched at any one time to 100%.
B. Create a snapshot of each server in the fleet using a Systems Manager Automation document before starting the patch process.
C. Configure the maintenance window to patch 10% of the instance in the patch group at a time.
D. Create a patched Amazon Machine Image (AMI). Configure the maintenance window option to deploy the patched AMI on only 10% of the fleet at a time.

198. A local agency plans to deploy 50 Raspberry Pi devices throughout a city. All the devices need to be managed centrally, and their configurations need to be consistent. What is the BEST service for managing these devices?